Realme Band 2 and Realme Smart TV Neo have been launched in India. Realme has introduced its next generation fitness tracker and smart TV in India today along with its latest Realme Narzo 50-series smartphone.

Realme Band 2 is the successor of the company’s Realme Band launched last year. Realme has introduced the latest Band 2 with a large 1.4-inch color display, 90 sports support and SpO2 monitor. At the same time, the company has introduced the latest Smart TV Neo of Reality with a 32-inch bezel-less display, 20W speaker at a budget price. Here we are telling you about the price and features of Realme Band 2 and Realme Smart TV Neo.

Realme Band 2 can be purchased in India for a price of Rs 2,999. The sale of this fitness tracker will be from the afternoon of September 27 from Realme.com, Flipkart, and Realme’s partner offline retail stores. Realme Band has been introduced with Black and Green Silicon, Blue Leather Strap.

Realme Smart TV Neo 32-inch can be purchased in India for a price of Rs 14,999. The sale of Realme TV will start from October 3 on Realme.com and Flipkart. 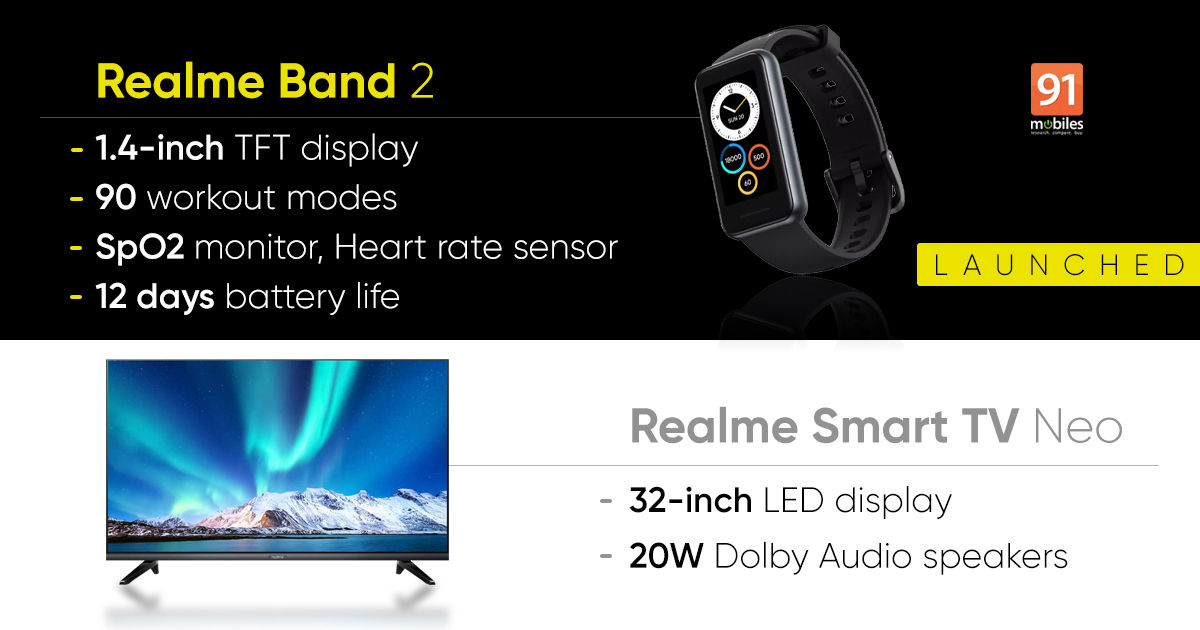 The Realme Band 2 fitness tracker features a 1.4-inch touch display with a resolution of 167×320 pixels and a maximum brightness of 500nits. 50 types of dialface have been supported in this fitness track. Along with this, it has an 18mm strap which users can change. Realme Band 2 has a GH3011 sensor for heart rate monitoring. Along with this, SpO2 sensor has also been given.

At present, 15 sports modes have been supported in the fitness band of Reality. The company says that soon an OTA update will be released for this, after which this fitness band will support 90 sports modes. Realme Band 2 can be connected to the phone through the Realme Link app. Realme Band 2 is water resistance. Along with this, it gives a backup of up to 12 days in a single charge. For connectivity, Bluetooth v5.1 has been given in it.

Realme Smart TV Neo has been introduced in a size of 32-inch which is TUV Rheinland Low Blue Light certified. This TV is presented with a bezel-less design, in which dual speakers of 10W are available. These speakers come with Dolby Audio support that offers crystal clear surround sound. Apps like YouTube, Hungama, and Eros Now are available for free in Realme Smart TV Neo. This TV of Reality has support of 64-bit MediaTek chipset, 2.4GHz Wi-Fi, CC Cast.